I loved the time spent nursing. I was never very good at slowing down to relax, but nursing demands sitting and relaxing. I was looking forward to nursing a third baby, who would come with his own challenges, but the time spent staring into each other’s faces was never wasted. Breastmilk has amazing power. Power to grow, power to heal, to prevent sickness, power to change, and power to eat cheesecake and lose weight! Woot!

I sat in my hospital bed, gown clad, halfway through a box of tissues, a pile mounting at my side. My third baby was gone. His tiny body was still curled up inside of mine, but his little heart had stopped. The nursing staff was now swirling around us making arrangements for the next day. Then the thought clicked into my mind. I was 34 weeks pregnant. If Reece had been born alive, he would have had a short stay in the NICU and then come home with us. I would have pumped breastmilk to feed him. I would have pumped like a mad thing to give him all the best starts. Milk.

“What will I do about my milk?”

I had spent some time involved in La Leche League when my second son was a baby. I knew a lot about nursing by now. In the group, I met some of the most caring, supportive women I would ever meet. Nursing is hard. It’s harder without support. My plan was to start attending meetings again once Reece was here to meet some new friends in our new city.

“Well, there are things you can do to stop your milk once it comes in.” The nurse offered me a slew of pamphlets on how to stop milk after loss and what to do to prevent mastitis. I kept them in a folder with all the other “grief support” papers. When I Googled “milk after losing a baby” every source was about how to make it stop. No one seemed to mention the idea of donation. I had plans to donate Reece’s extra milk to a mama in need. Now everything I would make was “extra.”

My first night home after being discharged from the hospital was restless. At three A.M. I sat at my kitchen table with my best friend in an eerily quiet house.

“This milk is coming and there is no baby to feed. My body doesn’t know there is no baby. Nature continues on its path. Nature always wins. I’m a firm believer in not fighting nature. I have two courses of action. I could drink sage tea, wear cabbage, fight the milk and be miserable. Or I could express the milk, embrace the milk, and help someone. And, of course, be miserable.”

I can’t say exactly why I expressed my milk. I had no plan for how long. I just went with it because that was the natural next step. I had just given birth. The next step was to feed. My instincts and my monkey brain lined up my body to feed my baby. It was nature. One cannot fight nature. Had I not successfully nursed two previous babies and had not understood and seen the amazing work of breastmilk, I probably would have suppressed my milk completely. My momstincts were high. Pregnancy. Birth. Nurture.

So that was my decision. Embrace the milk. Pump the milk and donate it, and help someone.

The first problem was that I had no breast pump since I hadn’t gone through the process yet being only 34 weeks pregnant. Processing through insurance would take a few days. And the milk was arriving soon. Reece was born on Sunday. By Monday afternoon I was in a world of engorged hurt. My heart was still wrestling with the idea of donation so I reached out to my group of LLL ladies and asked for support and assurance. Would my milk be worth it? My LLL leader from my previous group stepped forward and offered a pump for me to use.

The first time I pumped I was desperately trying to relieve the engorgement pain. I cried, knowing that if my Reece had been born alive, his feisty spirit would have latched on right away and prevented engorgement all together, just like his big brother, Grant. Without a baby to snuggle and nurse, I was in a new field. Alone. I made a desperate call to MilkWorks and cried into the phone. The woman on the other end of the line just listened to my haggard sobs.

“I’m terribly engorged and I don’t know what to do. If I had a baby, I could just feed him and I’d be fine. But there is no baby. My baby died. He died and there is all this milk, and no baby.”

I walked into MilkWorks the next morning and was met by a woman with a clipboard. There must have been a note on my appointment. No one mentioned my missing baby. No one questioned me. As I sat and filled out paperwork, I could hear a strong healthy hungry baby wailing. Tears rolled and rolled.

“Would you like to fill this out somewhere else?”

I silently nodded, collecting my things and following her.

Michelle came in once the papers were done. She brought me green tea. She sat with me and let me talk. I talked for a long time. Then she let me hook up and helped me work out some of the knots in my breasts. Some milk came out but not a lot. And yet I felt lighter, knowing that there was good people out there to surround me in love as I cried and ached for my baby. She continued to follow up with me during my entire time pumping and I will be forever grateful for her guidance and support.

The first milk was orange. The beautiful rich stuff that starts babies off on a beautiful beginning. The very first drops I claimed for Reece and will go towards making a Milk Locket. Right now it still sits in my freezer, waiting for the day I am ready to send it away. 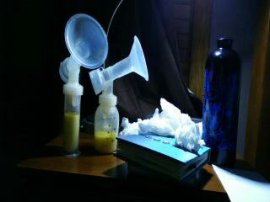 As I took time out every two hours to pump milk, it was my time to think about Reece and really meditate on what he looked like. His red-brown hair, his tiny toes, his scrunched up face that looked like his oldest brother. Pumping milk was time spent remembering Reece. And the hard truth was that it seemed the only outward sign that I had ever carried Reece in my body. My ability to lactate was the only evidence I had that I had ever been pregnant. I clung to the evidence as the waves of grief washed over me. I pumped milk at night, crying for the baby I couldn’t hold. I collected bag after bag and watched as my milk turned from orange to yellow to white.

I had a few options for donation. Nebraska has a donation organization set up to help link donors with babies in need. I first pursued that process and quickly decided  I didn’t want to be reduced down to a bag with a barcode. I wanted to meet the babies I would be helping, maybe even hold them for a few minutes.

I went to Human Milk for Human Babies and found my local chapter via Facebook. I posted my offer. One woman responded from a town far away. She was willing to drive, she said, and posted a picture of her baby. She then sent me a private message, telling me I knew her sister through Facebook. When I saw her maiden name it occurred me to that she was a childhood friend I hadn’t seen in 20 years or more. Reece’s milk would go to help her adopted baby meet his goal of breastmilk for the first year of his life. The fact that someone I knew from long ago was stepping forward wasn’t a coincidence. Having a baby in heaven prevents me from believing in mere coincidence. 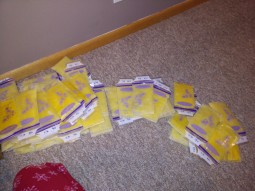 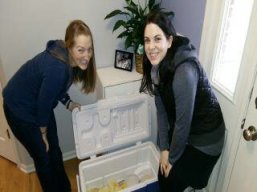 I continued pumping for an entire month. Another mom, one with twins and a tight budget, stepped forward to claim more milk. I got to meet them briefly in the car, about nine months old and one step closer without buying formula. My boys were momentarily fascinated with these babies and I loved that their mother introduced me to them. 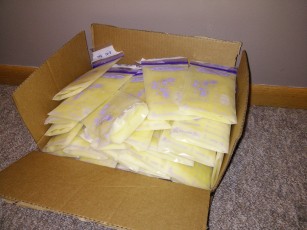 I had a small stash left, mostly first milk that was waiting for the right family. Shelby and her mother Rachel were the right ones. Rachel taught yoga at my YMCA and through my pregnancy with Reece, yoga was what I did often. (He hated it, by the way. Too much stillness, and squishing, and then more stillness.) Baby Shelby was born at 25 weeks and was a tough little warrior. Rachel was diagnosed with breast cancer. She could no longer pump milk as she underwent treatment. I offered her the best of what I had, the thick orange stuff. Colostrum: The mothership of breastmilk. My one request was that I got to meet and hold baby Shelby. Rachel brought her to me one afternoon. She was tiny and feisty and just stared and stared at her mother. Knowing she was my last baby recipient made meeting her so important. I am so thankful to have met her and to tell Rachel about Reece. 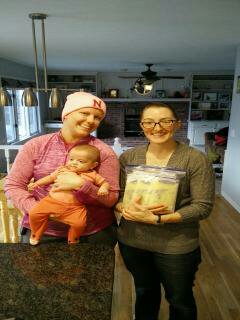 I struggled through sleepless nights and the swings of post-partum hormones. Through it, I pumped milk and thought of Reece. The bit of oxytocin that releases with a milk let down helped a bit with post-partum depression and the grief of a missing baby. The day came when I was laid up on the couch with mastitis after a night of rough sleep and a day of dehydration. With two older boys to chase around, I was having a hard time staying regular with pumping. 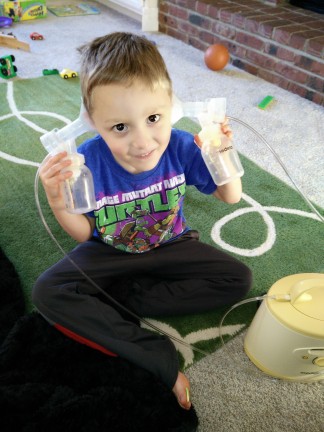 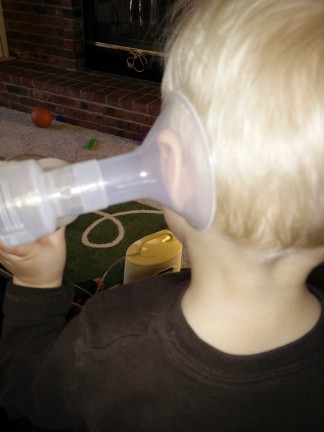 I looked at my husband and we knew it was over. My tiny piece of pregnancy was coming to an end. The outward proof of carrying Reece I so desperately clung to needed to change into something new. The day came when I pumped for the last time. 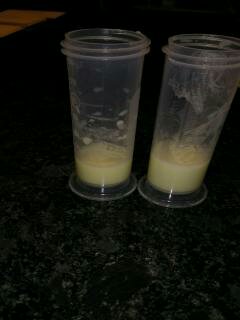 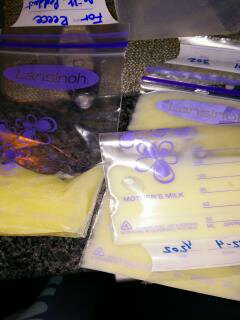 With Michelle’s guidance, I was able to slowly wean from pumping, cuing my body to make less and less milk until I was dried up. I wasn’t in pain, I wasn’t miserable, but I was terribly sad. I had plans to nurse Reece as long as he wished. For my first two, that meant about 13 months. I had visions of making it to 18 months if Reece’s first birthday came and went and we were still comfortable nursing. I had dreams of participating in the amazing culture of La Leche League. I had dreams of buying an expensive nursing bra. (That’s the luxury nursing moms fantasize about!) Instead, I lost my baby. And I lost all those dreams that went with him.

I don’t regret for a second the decision I made about embracing the milk. I was part of the culture of breastfeeding for a little while. Through Reece and the milk my body made for him, I met some amazing people. Reece has impacted three families and four babies. His legacy is only just beginning.

For more information on pumping after loss, click on this link.

For more information on the wonderful women and International Board Certified Lactation Consultants at MilkWorks, click on this link.

Here is a link I found helpful while on the journey of pumping after loss. Google didn’t yield many results for embracing the milk, but if you type “Pumping Milk after Losing a Baby” it yields greater results.   http://rowansmilk.blogspot.com